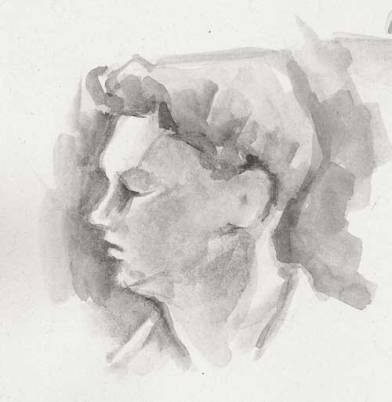 Saturday night I watched Borstal Boy, a romanced version of the early life of Irish patriot, playwright and poet, Brendan Behan. Mr. Behan was a man of letters—he wrote in English and in Irish—who unfortunately died quite young from the drink. He was the public face of the stereotypical Irishman, as well as typifying a whole generation of artists:  brilliant star and stumbling, mumbling drunk. He once described himself as a drunk with a writing problem.

The above painting is from a Youtube video here, where Mr. Behan sings the Auld Triangle.

These were painted using my new toy, an ArtGraf black carbon block. It’s a neat little block of water soluble carbon with which you can draw on wet or dry paper, or just rub a wet brush across the block for shades of gray. It’s an easy and clean way to practice brush work while watching television, so long as you don’t kick over your pot of water. The paper is my new favorite, cheap cover stock from the copy store.

José Emídio paints with the tailor shape of ArtGraf in the video below. Beautiful!