So, I haven’t been painting

There’s a story about painter Chuck Close that goes: When he was in the hospital, recovering from a paralyzing stroke, his wife said, for God’s sake, give him a paintbrush. If he doesn’t paint, he’ll die. In rehab, they strapped a paintbrush onto his hand and he invented a whole new way of painting that drew from his previous works, but did not —he could not—copy them.

He’s famous for the quote, “Art saved my life.”

I always thought I’d be like Close, creating art through any setback, drawing strength, sanity, and a sense of direction from the work.

Then my mother died, and I stopped painting.

I admit, painting had already scootched to the back seat last fall. As my mother grew weaker, I began spending as much time with her as I could, which meant I was away from my studio most weeks. I kept a sketch book, of course. I never went anywhere without a sketchbook.

This is the last sketch I made in my sketchbook. 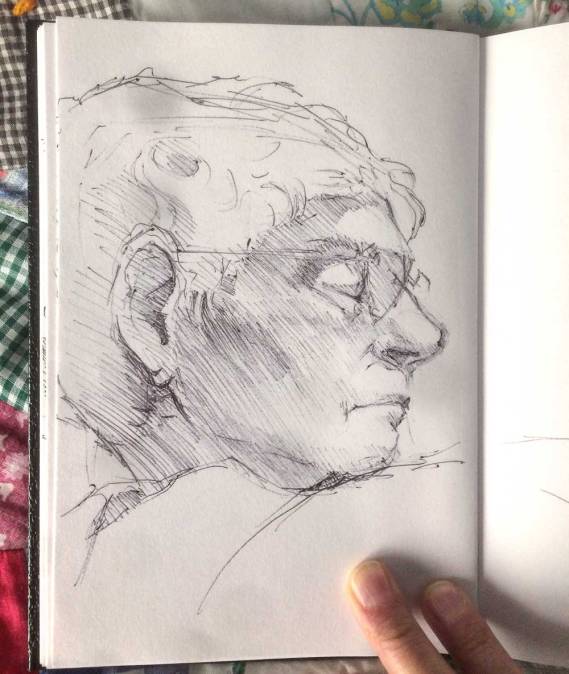 I drew as she slept in the hospital bed. She woke up and remarked on the drawing, then asked for a drink of water. 15 days later she died.

Since then, I haven’t touched paint and brush enough to really even remark on it. In February struggled through a month of classes with my favorite teacher, Felicia Forte, but painting felt like swimming through pudding, without the chocolate, and I didn’t—I couldn’t—continue.

It’s not that I haven’t wanted to work. It’s just that I can’t seem to get started, somehow. That’s not like me; I always worked, in the mood or not. I believed—I believe—that chance favors the prepared.  If you’re not inspired, just draw something. Practice; inspiration will eventually come whistling through the door.

And here’s the thing: All my life, artwork energized me. My fiddler says it makes me glow. But since my mother passed, painting and drawing exhausts me. Even when drawing the figure, an exercise I purely love, my arm feels like lead, my charcoal feels like a gritty lump of dirt, the paper wrinkles and cockles, and every mark I make is awkward, as clumsy as if I’d never before drawn in my life.

A few weeks ago I told a friend of mine, painter Chuck Waldman, that I didn’t know what was wrong with me. I hadn’t been painting. “I just didn’t have the ganas to paint,” I whined.

“It’s the grief,” he said, matter-of-factly. “You’re having a conversation with grief instead of with the paint. You have to have that conversation. When you’re done, you’ll paint again.”

That acknowledgement came as such a relief. I didn’t have to defend my grief, or feel guilty about it; he didn’t make me feel like a Debbie Downer, he didn’t make me talk about it, or try to shut me up about it. Grief rose and fell in our conversation like trout in still water. And I appreciate that so much.

Chuck’s words lifted something heavy from my heart. It was as if he lifted a stone that had collapsed onto my soul. Still trapped, but I can see some daylight.

Soon after, I started attending life drawing sessions again. I’ve made a few small paintings, mostly of my friend’s kittens (they are cute, non-threatening, happy). I’ve been working on a series of illustrations based on fantasy sketches I made in the wee hours last year, when I could not sleep.

Most days are still too painful for painting. On those days, I need activities that occupy my whole brain. Being busy is good. I throw myself into my job, focus extra sharply on the task at hand. I immerse myself in words, writing reams that will mostly never see the light of day. And I admit, I’ve sunk into the quagmire of social media, that soporific of outrage and cute-overload.

I now know that I won’t die if I don’t paint. It’s okay to rest a bit. To have that conversation with grief. And gradually, I hope, I’ll start to work more regularly, and once again my brain will fire like sparks from a Roman candle. I have to trust that will happen, because there are days when the brush looks like a weapon rather than a tool.

Meanwhile, I try to strap the brush to my wrist, and invite grief to a three-way conversation with art. Will that conferencing change my work? I don’t yet know.

Grief and art? If they’re talking, it’s behind my back.

3 thoughts on “Conversations with grief”