Halloween seems to be the lighter version of a much older celtic festival, Samhain (pronounced Sa-wane). We don’t celebrate the date in quite the same way that the old ones did (or maybe I should say auld ones?), with quite the same darkness. We’ve given it mostly over to children, or childish (some say boorish) behavior.

But deep down I think we know what this time of year means. We have a genetic memory of the wildness and the mystery of the season when the daylight shrinks and the night ascends. We’re entering a season of uncertainty. Of cold, of darkness. We forget, those of us living in this blessed Mediterranean climate, that in other parts of the world, the night, and the cold, awakens during this season and stretches out over the land . 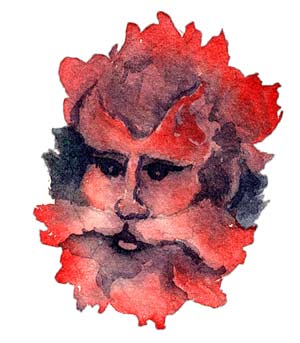 The green man takes on the colors of autumn. We can hear his voice in the crackle of leaves and fire. Some Wiccans say it’s the end of the time of the Goddess, and the beginning of the time of the God. Other people say that Samhain is the night during which the veil between the dead and the living is the thinnest, and that on this night the dead can cross over into the land of the living.

In this country, tonight is given over to wildness, to running loose in the autumn night that’s only just beginning to feel the taint of winter. It’s given over to costumes, and candy, and spooky stuff on every street. And kids know that the veil is thinnest tonight, and that what’s behind a plastic mask just might not be their beloved sister or brother, or the neighbor kid, but rather, someone dead who’s joined the hubbub of living kids, if only for an evening. And perhaps we know it too, as we willingly give out treats, just in case that cute kid in the the princess outfit is really not just a cute kid. She might really have been a princess.

While you’re waiting for or hiding from the little goblins and tinkerbells and obiwan-robot-vampire-princesses to come knocking at your door begging for candy, here are some Halloween links for you to explore.

The Witch of Forest Grove