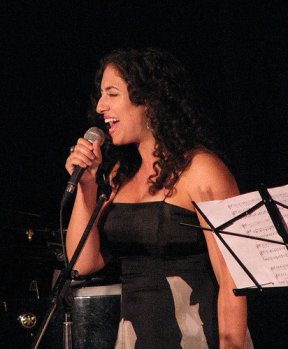 I met Heather Klein in our Yiddish class, where we learned the bulbes (potato) song, and she told of teaching it to a group of friends. She sang a few bars of a Yiddish song, and I soon became the owner of her latest CD, Shifreles Portret: A Yiddish Art Song Project. It’s been in heavy rotation on the cd player ever since.

Heather, who is classically trained, brings a richness of voice and emotional connection to stories of loved ones lost to war; of a fiddle player greeted in heaven by his friends; dancing women; and praying bubbes (grandmothers). Heather is the third leg of the Inextinguishable Trio (special guest Ilana Sherer on violin and Alla Gladysheva on piano), a group devoted to performing lesser-known to newly composed pieces in Yiddish, Hebrew, and Ladino. In keeping with the Yiddish tradition, they also perform musical theatre as well.

When she asked me to display my paintings at her annual Hungry for Yiddish; a Mitzvah Project, I was honored, and of course said yes! She graciously agreed to talk a bit about the project, her music, and her love of Yiddish.

1. How did Hungry for Yiddish; a Mitzvah Project get started?

Five years ago I lost a special person in my life to suicide. He was a chef in San Francisco, and did not make a lot of money, but he loved to feed people. Wherever we went he would give whatever he had to people on the streets that were hungry or even just asking for money, and I admired him for being selfless. When I lost him to suicide, I realized that I wanted to give something back in whatever way I could. So I decided to give through music. I started a concert benefit during the colder months when it is harder to find food or warmth. It’s called Hungry for Yiddish; A Mitzvah Project. The proceeds from admission are given to the local food bank, and my friend’s spirit of giving is remembered.

2. Tell me little bit about the songs you’ll be singing at the event.

I pick songs based on the visual artwork on display at the concert. The art this year consists of portraits of people. Every portrait has a story to tell, so I’m performing songs that let you get a glimpse at the persons character. Those include songs about a Gypsy, a grandfather, a street kid and a young woman looking for love.

3. The material you choose is haunting and yet so joyous.
Most Yiddish music sounds sad because it’s played in darker keys and the lyrics are not always uplifting. You’ve got to remember that many of these songs were written by people who lived in oppressed, violently anti-Semitic places. But they stayed hopeful that things would get better, and the songs reflect that.

4. What is your favorite Yiddish word or phrase?
“Mit rekhtn fus.” Another way of saying good luck. Literally meaning “with the right foot.” It was the first Yiddish phrase I was taught before I performed with other Yiddish singers.