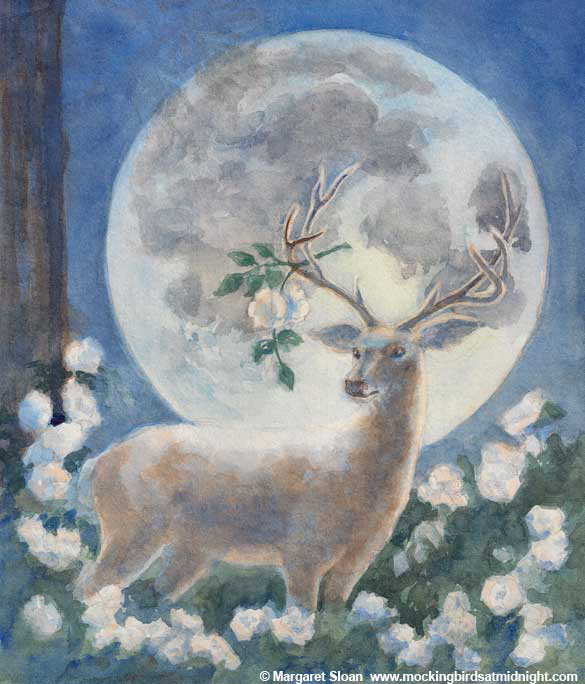 Hart in the roses
Watercolor on paper
© Margaret Sloan 2013

July’s supermoon kept me awake for the third time this year, and my wakeful night inspired this watercolor sketch for a painting of a hart in the roses. In North America, the full moon of July is known as the full buck moon, when deer have antlers (some say the antlers are still in velvet. Any readers out there know for sure?)

I’ve been a gardener for many years, and I don’t find deer as thrilling as an un-gardened person. But a hart  in the roses, edged silver by the supermoon is a magical image. The hart (especially the white hart) is a mystical being in many cultures. A white stag led Arthur and his knights on hopeful quests, brought Hungarians to their homeland, gave Frenchmen pain from unrequited love, and made  Native American brides beautiful on their wedding day. The white hart even became the Christ in some Christian countries. And it was the white stag the children hunted in the first Narnia Chronicle that led them back through the wardrobe into their own non-magical world.

I live in an urban area, where deer are few and far between. So if I saw one in the garden, I think I would have to follow it. Until that time, all I can do is follow it with my brush and paint. It will have to be enough. 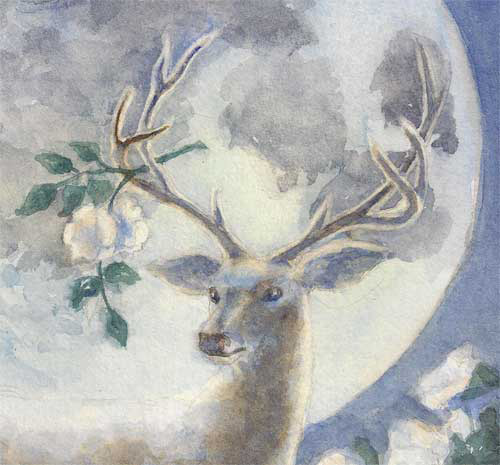 For more about the hart in mythology, you might try these sites: