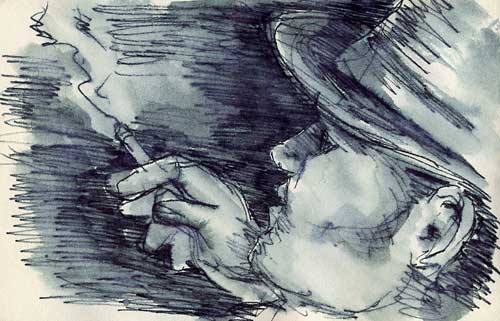 I recently bought a Niji waterbrush pen. It’s just a small synthetic brush attached to a tube that holds water. Squeeze it and water comes out. It is evidently a Japanese invention—you can read more about them at Russell Stutler’s sketchblog. He’s an American artist living in Japan, and his sketches of places in Japan are beautiful.

The waterbrush pen has added a new dimension to sketching in the car. I can whip out a quick sketch with a cheap felt tip pen and then spend several more stoplights working out the details, adding form, value, and tone.

One day last week while waiting at a particularly long light, I was pleased to look to my right and find  a man wearing a fedora pulled up beside me. And he was smoking! How often do you see that in the Bay Area? The universe couldn’t have presented any better momentary travel companion. I dashed off the initial drawing with a plain old cheap felt tip pen during the 30-second  red light, then I built up the drawing using the pen and waterbrush while I waited at subsequent stoplights. I finished the sketch in the parking lot and felt happy and satisfied as I started my day job.

2 thoughts on “Waterbrush pen and the smoking man”