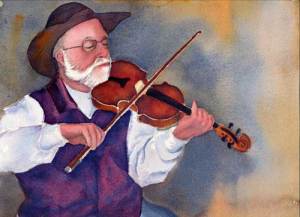 This is a painting of my husband in his costume for his old time band Harmon’s Peak. He was practicing before a gig and I snapped a few shots of him.

For the past 3 years I’ve studied watercolor with Steve Curl at the Pacific Art League in Palo Alto, California. I’ve learned a great deal from him, particularly how to plan a watercolor, and then not be afraid of the paint. We work primarily from photos, which some artists think is cheating, but I always make my own drawing rather than projecting or tracing. And Steve always cautions us  to not slavishly copy the photo, but to make a painting out of it. That may mean altering the photo a bit, leaving out the background, adding a tree, or rearranging the elements in the picture. In this painting I had to make up the light source, as I had used a flash for the photo and it washed out the nice home lighting that made me take the photo.